Photos of some Nigerian Consultants and Senior Doctors attending Saudi Arabia Recruitment Exercise held in Abuja trend in the internet.

The recruitment comes amid ongoing strike action by the Nigerian Association of Resident Doctors (NARD).

Doctors commenced this strike over irregular payment of salaries, among others.

According to Punch NG, THE Federal Government on Monday feigned ignorance as a firm concluded arrangement to recruit Nigerian doctors for Saudi Arabia.

The government-licensed recruiting agency based in Abuja has fixed Tuesday (today) as interview date for doctors who registered for recruitment on its website.

This is coming at a time resident doctors under the aegis of the Nigerian Association of Resident Doctors are currently on strike.

Our correspondent reported that flyers announcing the recruitment had been trending on social media, especially WhatsApp platforms.

But when contacted on the matter on Monday, the Minister of Labour and Employment, Chris Ngige, denied knowledge of the exercise.

He directed our correspondent to the Minister of Health, Osagie Ehanire.

According to Ngige, the Health minister is in charge of doctors.

“I am not aware of that. You can please contact the Minister of Health. His ministry is in charge of doctors,” the minister stressed.

Ehanire, however, did not take the calls made to his known telephone line.

He had also yet to respond to the text message sent to him on the matter as of the time of filing this report.

However, in his reaction, NARD President, Uyilawa Okhuaihesuyi, told The PUNCH that doctors were at liberty to do whatever they wanted to do since the government had failed to fulfill its promises.

He said there was no benefit for any doctor still practising in Nigeria, saying those who were staying back were only being patriotic. 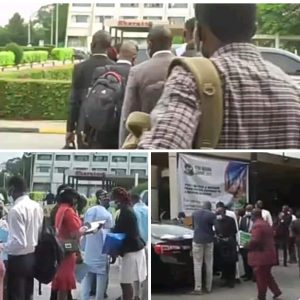