Cubana Chief Priest weighs in on the controversial affair between Tega and Boma.

The popular socialite, Cubana chief priest has weighed in on the controversial “Kiss-and-tell” situation between Big Brother Naija Housemates, Boma and Tega

According to Cubana Chief Priest, it is very wrong to have s£x with a woman and then publicise it.

Apart from that, he also reminded the younger world of the biblical implication of adultery citing King David as an example.

Taking to Instagram is celebrity barman, Cubana Chiefpriest stated his view on the issue by decrying the wrong act of Boma for having sex with a married woman.

He also urged the youths to avoid married women and never be heartless like Boma.

“How Will You Comfortably Fk A Married Woman, Then Publicize it And Above All Humiliate And Berate The Woman N Her Husband Saying Their Pu**y Smells Like Fish. The Punishment Of Fkin A Married Woman Knowingly Is Deep Even King David God Most Beloved Was Punished Severely By God For Doing It, His Child Died And His Wives Cheated On Him Rapidly, Dear Young World Try Avoid Married Woman Don’t Ever Be Heartless Like Boma.” 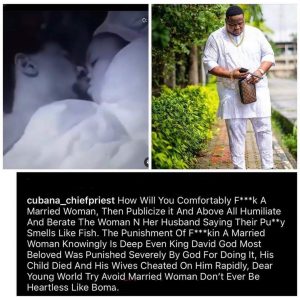