Due to the rising cases of insecurity in Zamfara and other cities, the Nigerian Communications Commission (NCC) has directed all telecommunications providers to shut down services in Zamfara State from September 3, 2021.

According to the memo, the shutdown of the telecoms sites which would last for 2 weeks, had become necessary due to the lingering insecurity in the state.

The Nigerian Communications Commission (NCC) has directed telecommunications providers to shut down services in Zamfara State.

This was disclosed in a memo signed by the vice-chairman of the NCC, Professor Umar Danbatta, and addressed to one of the telecoms providers.

According to the memo, the shutdown of the telecoms sites which would last for 2 weeks, had become necessary due to the lingering insecurity in the state.

“The pervading security situation in Zamfara has necessitated an immediate shutdown of all telecommunications services in the state from today, September 3, 2021. This is to enable relevant security agencies to carry out the required activities towards addressing the security challenge in the state.

“In line with this requirement, Globacom is hereby directed to shut down all sites in Zamfara State and any sites(s) in neighbouring states that could provide telecommunications services in Zamfara State. The site shut down is for two weeks from September 3 to September 17, 2021, in the first instance. Your urgent action in this regard is required,” the memo read in part.

This decision is coming six months after the Federal Government declared Zamfara State a ‘no-fly zone’ and banned all mining activities in the state.

The state has been a hotbed of criminal attacks ranging from kidnapping and banditry.

Last week, the government shut down schools after the abduction of 73 students from a public school in the state. The abduction occurred 11 days after students abducted from the College of Agriculture in Bakura, Zamfara, regained freedom. 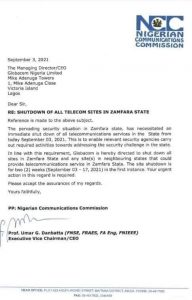